Okay... one little thing I left out of Saga of the Splintered Realm (and I hope that's all!). I was running a solo play test of some monsters and ideas for Vault of the Goblin, and a fighter dropped to negative hp. So, I decided to look up the rules (even though I knew them) and realized I couldn't... because they weren't there! I've added this to page 50 of the book and updated the file (a grey text box in the middle of the page) but thought I'd post it here just in case...


Damage, Death and Healing. At 0 hp you are unconscious; at the negative value of your CON, you die. You recover 1d4 + CON modifier hit points per hour of rest. Most monsters are assumed to be dead at 0 hp.

Also, the game peaked at #16 this afternoon of RPGNow hot sellers... it's down to 18 right now, but I stay hopeful that it will get into the top ten this weekend at some point...

Posted by Michael Desing at 8:16 PM No comments: Links to this post

1. The core rules for Saga of the Splintered Realm are now available (thanks to the Kickstarter backers!) as a pay what you want download. The rules are going to see some minor tweaks to aesthetics of the layout and tables over the next few months before the print edition is released, but this core book is good to go. Get your copy now! I'd love to hear what you think, since many of the final decisions were made behind the scenes, and were not part of discussions I threw out there... 2. I've gone back and forth quite about about my responsibilities/commitments, and based on my health situation (see #3 if you want to know), I'm going to suspend my Army Ants Patreon Campaign effective tomorrow (so that no one is billed for November). I've struggled this month to keep up with updates with everything going on, and I've decided that the game is the bigger priority, so I've put all of my energies there. I still owe the Patreon supporters some Army Ants stuff, and (although they may have to wait a bit for it), I think they'll be happy with what they eventually get. I plan to eventually re-group and re-launch that campaign in the future, but for the next few months I just cannot guarantee regular updates.

3. On the medical front - I have a stage 3/4 cancerous tumor in my right sinus (the official term is esthesioneuroblastoma if you're interested in googling it like I did and freaking out)... I have surgery on November 10th, and will have several months of radiation and recovery after. I am getting as much work done before the 10th as I can, because I expect to be pretty much useless for a while after. I know that many people have been sending kind words, thoughts and prayers my way, and I truly appreciate all of it.

Mike
Posted by Michael Desing at 4:41 PM No comments: Links to this post

Two, Two, Two Webcomics In One!

I got behind due to my surgery, but managed to cobble two pages together this weekend to get back on track... here they are (for 10/6 and 10/13 respectively): 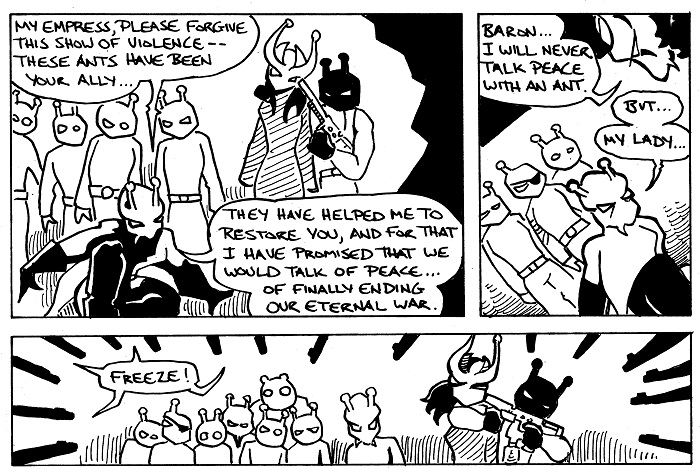 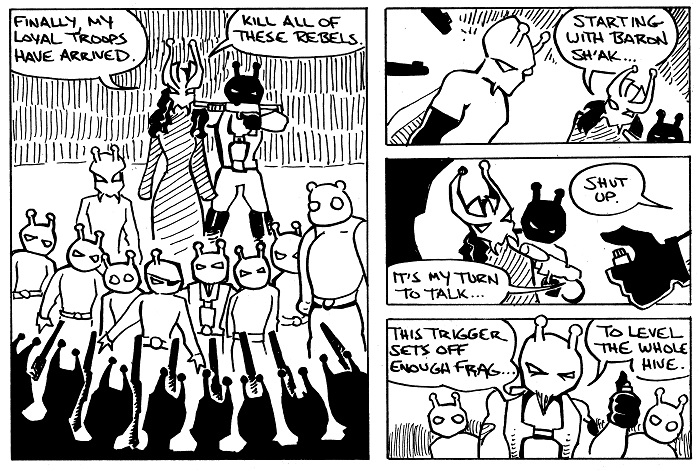 Posted by Michael Desing at 8:14 PM No comments: Links to this post

As you have likely noticed, I've been a bit quiet on the blogging front. I generally don't talk too much about my outside life, but in this case it's directly impacting my work and ability to keep to deadlines, so it's time to let you all in...

I went in for surgery this week to have polyps removed from my sinuses that had been giving me a great deal of trouble. My surgeon discovered that this wasn't polyps, but was instead a cancerous tumor attached to the smell receptors in my brain. I'll need follow up surgery with a neurosurgeon to remove the tumor, and may need radiation and chemo at the back end to continue to fight this. At this point there are a number of unknowns.

That said, I am in a good place with my creative projects (the core rules for Saga of the Splintered Realm have been lingering at 90%+ done for a few weeks as I dabble with it here and there) and I plan to continue working at that as I spend time at home. However, I want to say that I may drop in and out of visibility quite a bit, and I can not guarantee a January release for the game or weekly updates for the comic - my life is just too unknown at this point. I know that it will help me to have positive things (like my game and comic) to focus on, but I also know that by letting you all in, I'm relieving myself of possible stress that could hurt my recovery.

I am grateful that I have a strong group of friends, great family, and strong faith that are going to get me through this. But it's going to be a fight.

Thanks for your support and understanding.

Mike
Posted by Michael Desing at 2:38 PM No comments: Links to this post