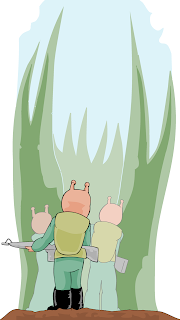 I think it's a fair question. Of my three 'properties', Army Ants is the most niche. It's got the smallest audience. It doesn't have the potential broad appeal of fantasy games. It doesn't have the competitiveness (and money-making ability) of supers gaming. It is, consistently, my lowest-performing major 'brand'.

So why the heck do I keep coming back to it?

It's a fair question, and one I ask myself a lot. Why wouldn't I work on something that people are more willing to pay for? Why wouldn't I develop a game that has a larger potential market? I think that there are two primary reasons...

1. Themes and Story. This is the big one. Army Ants keeps confronting me with the same themes that have always been interesting to me: the role of the individual in a society, sacrifice and friendship, grit in the face of adversity. Good vs. evil. These are hard-wired into the heart of the Army Ants world, and I get to continually refine these in new directions.

In addition, I conceived of an Army Ants 'super narrative' about twenty years ago, and I've never had a chance to tell the whole story. When I sit down to write about it, I'm not 'making things up'. It's all there, already largely formed in my subconscious. I'm just telling you a story that's already happened.

2. It's me. My fantasy game will never (ever) be more than a shadow of the grand-daddy of them all. I think it's a great, simple, clean knock off. But, at the end of the day, it's a knock off. It gives me a chance to re-create the game I loved growing up. That is powerful. But, every time I walk into a game or book store, I cannot help but marvel at the quality and quantity of content for D+D that I will never be able to replicate. The supers game is the same way, but with a different set of limitations. My game world (which is a big part of what I think makes a supers game tick) is never going to be more than a mashup of and reaction to the big two comic book universes. At the end of the day, that game is attempting to emulate someone else's material, not to forge my own.

Army Ants doesn't have any of those limitations. Nobody is doing Army Ants better than me. There is no external yardstick that I'm inevitably falling short of.

The other nice thing is that with Army Ants, I'm lingering in the shadows of some of my favorite worlds. Tolkien was mocked by the scholarly community for writing about hobbits and dwarves. Richard Adams and Stan Sakai have crafted stories around rabbits. Dave Sim did 300 issues about an aardvark. These are some of the people I most admire as a creator, and it feels like Army Ants is my world. It's where I want to spend my time.

Posted by Michael Desing at 4:28 PM