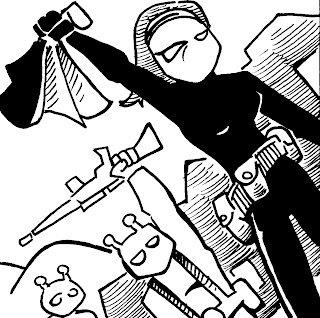 Mary and I statted up some characters and invaded a camp of fleas who had taken a fly double agent hostage. The camp was mostly populated by level 1 fleas, although there were a few level 2 guards. Mary and I both made level 5 characters, so it shouldn’t have been much of a challenge for them. In general, they did well. Mary’s ladybug covert ops specialist managed to stealth into the compound (she improvised a stick into a pole for vaulting the fence, and she had her die explode on the stealth roll, so she was hidden very well inside the compound, among a stack of supplies). My ant commando didn’t fare so well; he managed to leap the fence too by vaulting it, but he failed his stealth roll, and was quickly under attack by the tower guard. He charged the tower, dodging fire and climbing up to capture it. While he threw down grenades and drew fire, Mary’s character snuck around, took out the other tower guard with her rifle (and silencer), and climbed atop the command post, sneaking in through the air vents.

It took my character about six rounds to take out all of the fleas, and he took only minor damage. However, the ladybug didn’t fare quite as well. She dropped in through the air ducts and double-botched with her rifle, so it jammed, and she had to resort to her sword (lucky for her she picked one up at character creation!). She lost about 2/3 of her hits before managing to take down the two flea goons that stood guard.

Here’s what I discovered about the system thus far:
- It’s pretty well balanced. The session flowed quickly, there was some variety to the action, and the mechanics reasonably supported what we’d expect to have happen.
- Grenades work better than I expected. They give ‘grenade like’ results. You drop a grenade on a pack of fleas, and several of them fall. I know it seems logical, but I was concerned that grenades were going to either be over-powered or under-powered. They worked just about right. If the fleas had been much tougher, they might have survived a grenade blast with major wounds; as it was, they fell quickly.
- I’ve got weapon damage for rifles rated a bit too low. Both of us were using weapons that dealt D6 base damage, and that felt a little weak- and we were fighting low-level foes. Against tougher foes, battles are going to come down to attrition, and I want to avoid prolonged battles every single time you have combat. The battle between the ladybug and the two tougher fleas went about 7 rounds. Not terrible, but a bit longish.
- We played with an exploding dice mechanic, and I liked how it worked. If you roll max (i.e. 6 on a d6) you get to take 5 and roll again. This gives more variety, and makes even ‘impossible’ rolls possible even when you’re only rolling a D4.
- We also played with the Moxy mechanic (which is sort of like this game’s Resolve) whereby you get to take automatic dice explosions on rolls. This worked well.
- Our characters ended up with comparable builds, although that was intentional – Mary was a ladybug covert operations specialist and my character was an ant commando – quick, light, stealthy characters with light weapons relying on secrecy. You’re going to end up with comparable stats.

Overall a fun session. For the first time out of the gate with a new mechanical system, it was quite polished compared to most first play tests that tend to crash and burn.
Posted by Dr. Mike Desing at 11:12 PM No comments: 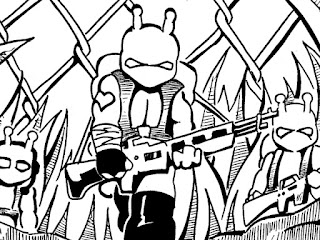 I've decided to do a Kickstarter for the next edition of MTDAA. I'm layering it under games, although it's both a game and comic that I'm trying to get support for. If you'd check out the page and give me some feedback before I put it live (it will be a few weeks before I do), I'd appreciate it!

I am still tinkering with how I want to do rewards, but this is the fundamentals... and I am hesitant to film a video, but I know that's important, so I'll have to suck it up and do it!

Thanks all.
Posted by Dr. Mike Desing at 9:22 PM No comments:

And the kitchen sink, too!


In the 90s, I published 23 issues of Michael T. Desing’s Army Ants comics… although the comic started out (for the first four issues) as a straight-out homage/parody of GIJOE, by issue 5 I’d begun to bring in elements of fantasy (Vault of the Drow-inspired stuff), issue 7 included a trip to ‘dinosaur island’, issues 8-9 included a battle with a cyborg arch enemy, issue 10 was a superhero parody, issue 11 included a fantasy tale of the distant past, and by the mid-teens I was deep into a storyline mixing the Karate Kid, pro wrestling and Star Wars. I have drafts for issues that never happened that included armored battlesuits and mechs.

The core game rules have always been approached from this ‘military first’ concept, with plans to build the world further as I went.

This edition should fix that, shifting the focus to a “Challengers of the Unknown” with the ants representing normalcy in a wild, wide and chaotic back yard. Here’s a glimpse of how the game should appear… and an articulation of design goal #2: the game must be broad enough to allow for adventure far beyond ‘military’ adventures. The heroes may be a military unit, but they are a military unit in a world with a much wider range of adventure:

You’ve just stepped into a world populated by military ants who defend their hill and queen against unending threats to their security. This back yard harbors ladybugs who operate a massive intelligence network, spiders who dabble in sorcery, potato bugs who wield the martial arts and ancient mystical practices to defy the natural laws of the world; it has a wasp empire forcing its tyrannical grip upon all corners of the land; it has centipede overlords ruling over underground cities where gladiator pits set insect against insect; it has garter snakes of incredible wisdom hidden in its far reaches, primeval lizards prowling its lost wilds, ancient artifacts hidden in its distant ruins, and cybernetic anomalies that hard-wire innovative technologies into their carapaces to boost their natural abilities. It has fleas roaming the countryside, picking through the scraps of the unending war and forging mechanical oddities. It has mosquito mercenaries and a fallen fly kingdom. It has a trashcan city, a desolate sandbox, and a deadly fire pit. It has a deep well with hidden secrets. Its rain storms presage incredible floods, and its winters turn the back yard into a barren waste.
It’s a crazy place.

You know, the more I think about it, the more that I think the introductory adventure should be an exploration of an old kitchen sink sitting amid a scrap heap...
Posted by Dr. Mike Desing at 8:47 AM No comments:

Back to basics: the ants


I haven’t blogged in a bit – again – but that doesn’t mean I haven’t been busy. At school, we’re plowing through staging a production of Les Miserables, and having a great time. (Also saw the movie today, so we’re pumped to get back to work on it next week… I digress) In my limited down time (and I’ve had a little bit this week), I’ve been on to the next project. I’ve got a smattering of an idea for how to re-work many of my long-term concepts for Army Ants into a new game engine, and I’ve been doing some reading of my old Ant stuff. As I did with Mythweaver, I’ve gone back to the beginning (which stretches nearly 20 years now) and have started to inventory the good, bad and ugly of previous editions of the game. I’ve done my ‘ultimate edition’ of Mythweaver that takes the best of everything that’s come before – now it’s time to do that with Army Ants.

Right away, I know that this is not going to use the same game engine I’ve been tinkering with for the last few years – the Resolute system that has been the backbone of Mythweaver and Resolute. This project is going back to basics, to many of the key concepts from the first edition of Army Ants (the first RPG came out in 1997). In fact, it’s going further back than that.

The first RPG I ever wrote was in a spiral notebook, and it was called ‘Battlefield’ (maybe 1984?).  The game was built backwards – it started with a map I drew of a fortified island controlled by a mercenary warlord. It had a castle fortress, a volcano that had been engineered as a missile silo, a small airfield, a missile base, a beach, a small jungle. We wanted to create a huge mission group (dozens of soldiers – fighter pilots, bombers, airborne rangers, a platoon of marines) that would launch a multi-pronged attack on the island. The rules existed only to allow us to do this. I spent about a week coming up with the rules for how we’d make it work, and we spent some of Friday night, and all day Saturday, besieging the island with our squads of troops. There were no miniatures involved- this was all pen and paper role playing- and we were just as concerned with the individual abilities of each commando (they all had names, personalities, inter-group dynamics) as we were with the larger tactical units. In fact, we spent much of our time in the prep sessions creating characters for each fighter pilot, each grunt, and each saboteur who would take part in the assault.

I don’t mean to over-glamorize this, or to sell myself as a prodigy game designer at 13 years old. It was an ugly, clunky little game that we had to hold together with duct tape and chicken wire to get through the weekend, but at the end of it all, we all felt that we had ‘simulated’ in some way this assault, and were satisfied that the mechanics had fully supported our immersion. Yeah, I know. We didn’t talk that way, or think that way, but this is what ‘that was awesome!’ meant.

So there’s design goal #1. The game – whatever it looks like – has to allow you to do that. You have to be shift back and forth between individual missions, and the game must fully support every aspect of a large-scale military siege, but do so in a way that allows you to attack an entire fortified island on a number of different fronts in a single weekend. It’s NOT a wargame. It’s an RPG that allows you to take your RPG characters into a wargame scenario, and continue to roleplay through it. While some systems I’ve published have included some mass combat rules, this game has to include mass combat as a central part of the narrative.

To go a step further, the large battles in the original Star Wars trilogy operate under exactly the sort of the dynamic I’m looking for. You have these huge battles happening, but it’s all just the backdrop for the smaller character-driven stories happening within it. You aren’t worried that you have just lost 8 combat interceptors and you are going to take a penalty to your next tactical roll – you are worried that 8 of your allies (I just had breakfast with those ants!) are now a smear mark on the side of the canyon, and the other characters swear solemn oaths that they will be avenged!
Posted by Dr. Mike Desing at 11:43 PM No comments: