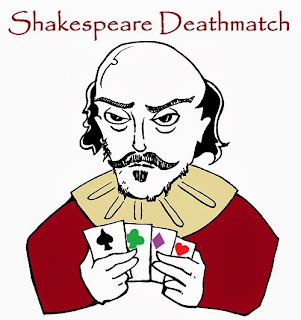 The Kickstarter for Shakespeare Deathmatch is now live! Stop by and check it out. I'll be posting updates on the dedicated blog space for the game.
Posted by Dr. Mike Desing at 10:20 PM No comments:

For fun, I've put together a side project called Shakespeare Deathmatch. Mary and I are writing this together.

The poop doth get real.

While the original plan was to have Zak go right at the heart of the mound from the onset, the image I posted yesterday has been echoing around in the old noggin, and we’re going to start instead at the fringes of the mound, at one of the more remote entrances. Zak will be hiding out along a road leading to the mound, waiting for a termite supply truck to go by – then he can (secretly) hitch a ride into the mound.

The termites share a ‘central’ shipping and receiving facility, with secure branches that lead into other parts of the mound. There’s something nicely bizarre about a group of warring, insane creatures who share a common loading dock for their stuff… they stand around trying to psych each other out, and when a shipment arrives for one, their reps grab it and run into the facility laughing maniacally at the others. This is a metaphor, but it’s kind of the idea. They all work in secret in this shared facility, taking their individual shipments through secured gateways, but using the common receiving area. They don’t actually bring the fight here – in large part because it’s the lackeys who are sent to retrieve shipments - and the lackeys don’t really want to fight and kill each other unless ordered to do so. They probably talk a lot of smack and threaten each other routinely, but they leave their guns at home.

It might be a good idea that this is a bit more formalized, so that no weapons are allowed into the shipping section – all have agreed that they need a way to get things into the mound that they can use, and so they allow this common area to remain common.

I suppose that any sort of ‘gentleman’s agreement’ of this sort is likely to break down at some point; maybe we need a fifth faction within the mound (connecting this faction to the workers who maintain the place) of an elite royal guard whose only purpose is to moderate the fight between factions. They are adjudicators of the will of the High Queen, fulfilling her final wishes. They are the ones who prevent others from just picking off workers at random, and they are the ones who prevent larger attacks upon the mound. In fact, these guys are the biggest challenge to a group of ants that might try to sneak in, because they are actively looking for non-termite intruders! The other termites don’t really care if ants are poking around (and probably will try to use them to attack other factions), but the royal guard? Not so much…

Termite Ability: Binding Spit. The termite may strike a target up to rating centimeters away, rolling Prowess + Binding Spit and the target rolls a Body Feat to shrug off the effects of the spit. Targets failing the feat take a -1 die shift to all physical actions, and take a -1 shift to Move. It takes D4 rounds to remove the spit.
Posted by Dr. Mike Desing at 9:03 PM 1 comment:

Research into - you guessed it - Termites!

As I learn more about termites and their mounds, it’s clear that they are the perfect creatures around which to develop a megadungeon concept… Want to read further? Check out these two sites: http://www.pbs.org/wnet/nature/episodes/the-animal-house/the-incredible-termite-mound/7222/ and  http://en.wikipedia.org/wiki/Mound-building_termites

Okay, you’re back. A few takeaways:

The worker caste is neutral, and is below the soldier caste. This means that maintenance crews are always moving around the mound, repairing, replacing and upgrading environments – even in the middle of other stuff going on. They are completely disinterested in the politics of the place; their only motivation is to keep the place together. This means that the other castes either 1) ignore them entirely, letting them go about their day, or 2) take them and manipulate them to build/repair/construct as they see fit. It would make sense that the termite overlord of flame takes a bunch of these workers, puts them in fire-retardant suits, and sends them into the middle of his inferno flux reactor to help build the darned thing; and when it blows up in the middle of testing, another batch of workers shows up (alerted to the fact that there’s been damage done to the mound) and he sticks them in suits and puts them back on the job…

Soldiers naturally fly and naturally spit a sticky slime that impedes foes. Well this is nasty, is different from other things in the game, and gives them a non-lethal attack that has a mechanical side to it. Nice.

The environment of the mound contains all of these cool elements that give it the vibe I want – Fungal gardens? Natural ventilation shafts? A huge central flume? Egg chambers? SWEET

The mound includes many entrances and exits. This is a must for a megadungeon. I just have to pick one and start building from there.

My initial thought was that I’d start with one specific clan and build its entrance. Now, I think I want to develop a neutral node that connects to four other claimed nodes, work out some random encounters (and a handful of keyed encounters) and get this thing up and running.
Posted by Dr. Mike Desing at 8:15 AM 1 comment:

Here are a few more decisions/flavor pieces that shape the ‘big picture’ of the termite mound:

- We’re increasing from three termite clans/families to four. The fourth will be focused on genetic mutation, attempting to develop super-powers that would allow the queen to regenerate, live forever, and be nigh invulnerable. I see them extracting animal parts and radiating these, experimenting to see what happens. An entire node could be devoted just to developing a ‘human torch’ insect, littered with failed experiments and odd fire-based machines. The same could be true for any number of powers these termites would care to develop.

- The mound is an ancient space (by bug standards). There was once a great termite empire (back in the day – which might only be ten years ago, but to insects this would be a long time, right?) the termites constructed this huge, labyrinthine mound. Then, the sickness came, and wiped them out almost completely. They retreated into the dark, nursing their wounds and living on the edge of annihilation for a few generations. This most recent queen came to power, and restored the power and prestige of the termites, saving them from the brink of extinction. They began to return to the mound proper, exploring old passages and tunnels that had fallen into disuse, sometimes inhabited by other creatures. When the queen died at the height of this exploration, her daughters fell into fighting amongst themselves, and civil war broke out along clan lines throughout the complex. There are no clear lines of who controls what – they were once intermingled throughout, and when civil war erupted, everyone claimed a piece of territory and started to defend it.

- There would be ‘neutral nodes’ where none of the four families lays claim.


- As I think about this whole story, I’m influenced by the flavor of Arkham Asylum (a game I’ve never played, but which I think I get the basic premise – might want to track that down…) A lone dark hero descends into a massive complex populated by insane creatures of great power.

- Edit: I was thinking also that Phil is an important character, since he is in constant contact with Zak, providing him with intel or helping him work through problems (you can elect to take or ignore his advice at various points throughout). Then, as I was reading about Arkham Asylum, I saw that a character was included in the game that performed the same function... hmm. Great minds think alike! Just so you know, I did develop this idea independently of the Batman game - don't let your friends tell you otherwise!
Posted by Dr. Mike Desing at 8:24 AM 1 comment:

Back in the Saddle - Again!

Hooray! My play is done ('Romeo and Juliet' closed on Saturday), the set is struck, and all of the final wrap-up is done... meaning that I can fully shift my creative gears back to Army Ants! I have managed to keep up on the webcomic (barely) over the last few weeks, I got caught up on packages that I owed people (sorry Brett and DJ, but everything went out toady) and have also been thinking through some of the big ideas for the termite mound.

As far as the mound goes, here are a few broad strokes:
- The mound is an organic rather than modern structure. It has utilities, wires, ventilation shafts and elevators, but these are all nested within an organic, living super-structure.
- Rather than designing by 'levels', I'm going to design by 'nodes'. The thinking right now is that a node will be a themed section within the larger facility. Each node would consist of maybe 10-20 encounter areas. Each node would be an independent environment (with its own utilities and infrastructure) that would have links to at least two others nodes.
- Each node would be identified by a moniker instead of a number. Instead of 'node #1', you will have 'the node of the enervating eye' or 'node of the fallen shades'. In this way, I don't have to worry about how I'd ultimately assemble this whole thing - I can layer new pieces into the larger structure in any order I want, and still create a cohesive whole.
- It would be cool if each node provided an opportunity add a new rule/mechanic/element to the game.
- A gimmick for how this all works is a device that Zak will carry that pulses a sonar wave. The sonar will ping back the layout of the node (since the walls/doors within a node are thinner than the super-structure between nodes). He can explore a small section at a time, getting a map before he sets out, and clearing the map as he goes. It would still be possible to hide things that don't show up on the sonar, and build those into individual encounter areas.
- Chaos is the order of the day. This environment should be exceptionally chaotic, alien, and weird. The termites are not above summoning spirits, gathering energized vats of brains to power psionic machines, building golems out of dead insects, bio-engineering plants and mushrooms with mutant qualities, and imbuing themselves and others with a variety of afflictions just to see what happens.