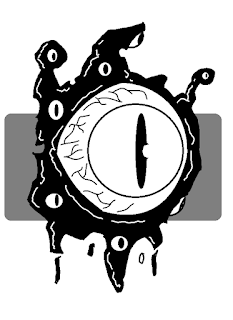 Module B1: 66 Dungeon Dwellers. This ain’t your momma’s monster manual. (unless your mom is THAT cool). Drops on Saturday, 4/6.

Module E1: Against the Goblins. These goblins are bat poop crazy. That’s probably from the bat poop. Drops on Saturday, 4/27.

More Mapping... This Time With GOBLINS

I wanted to make an introductory adventure with goblins that was fun and kind of offbeat. I think I have succeeded. Here's the elevator pitch: when a goblin chief goes bat poop crazy - from consuming too much bat poop - he makes a plan to protect the bat poop he loves, and his own immortality.

I plan to release this in the next week or two, but for now here's the map: 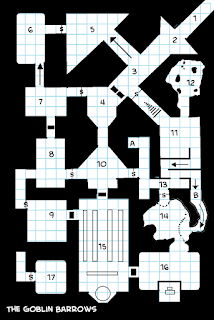 So this morning, I decided to start a solo game and take my character through the introductory adventure in the core rules. Here are a few basic takeaways before I get into the specifics of characters:

It's a fun little adventure. I like the little seeds of things that can get you going further without much effort.
The rules are nice and fast and loose. I really like this iteration. It's fluid. I was able to run the entire adventure in about 2 hours, and that is with rolling up two characters as well!
I created a few house rules on the fly... which prompted this morning's earlier posting about house rules.

I ended up making two characters for this adventure; a stoutling defender and a red gnome trickster. Basically, I wanted to play the stoutling, but I realized about halfway through that he was going to be tough to play solo for a long time; he has no ability to take on multiple foes at once, so any time there were more than 2 or 3 foes, he got wrecked pretty quickly. In addition, as he scales up, his abilities are going to be largely supportive and defensive. He's a GREAT guy to have on your team; he's not such a great guy to have AS your team.

The red gnome trickster is a much more capable solo character. He has multiple ways to get past obstacles (he can try a STR check if the burglary doesn't work to open a door); he has ways to do some crowd control (sleep), and he has some ways to quickly deal some automatic damage. He'll scale better for solo play; he can sneak by really tough foes and scout things out, get extra damage with his sneak attack... he has more options for how to manage a variety of situations. I found that I really needed that if I was going to pursue solo play.

FYI, here are the two character sheets: Sty has he was in progress, and Myth as he had finished the adventure (I spotted him about 30 xp to get to level 2; yeah, I know...) 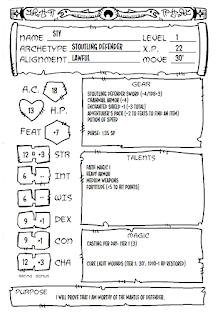 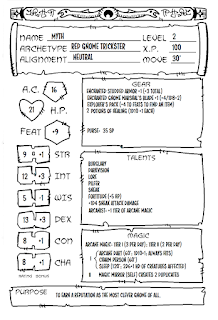 This post will be updated with house rules I am using for Tales of the Splintered Realm. Use or don't use as you see fit:

The rules state that scrolls must be found on adventures. I rule that scrolls may be purchased in some places. A small country shrine may carry tier 1 scrolls, while the temple in a major city may stock scrolls of up to tier 3; you would have to journey to the Library at Asgoth's Summit to find a scroll of Tier 5.

The rules have no mechanism for purchasing magical weapons and armor. Larger merchants may have gained some through barter. The standard prices are:

Larger alchemical shops are going to stock some basic potions. Most potions sell for around 100 sp, but more potent elixirs may sell for upwards of 500 sp.

Use the prices above to sell items to vendors; you get 50% of the value in any item you sell back (including mundane items you purchase; when you upgrade your studded leather armor to chainmail, you get 10 sp credit from the studded leather towards the new price)

Tales of the Splintered Realm has been updated. Updates include:
Posted by Dr. Mike Desing at 8:38 AM No comments: 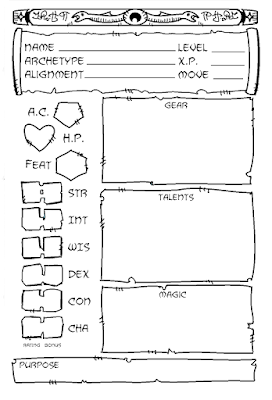 The Tales of the Splintered Realm update is almost ready to go. I just want to give it another day of editing and clean ups, but I'm happy with how it's turned out. I upgraded from 16 to 20 pages, but in the bargain added 5 archetypes (including the 'big four'), added faith magic, expanded arcane and nature magic to 6 tiers, added a half-dozen monsters, and expanded the treasure rules to scale all the way to level 6 so that no additional treasure tables will be needed. I also revised spell rules to keep them simple and clean, but to make them better mirror class D+D spell casting with available spells per day.

I was working on a treasure supplement, and realized that higher-level treasures would require new or expanded treasure tables, and I didn't like that anything later would supersede the core rules. I would prefer that future materials would expand things; I was able to make a few modifications to the basic tables and organization to increase its usefulness as a foundation module that other modules now can expand on in any number of directions.

Oh, and here's a character sheet I made as well. Because. Character sheets. Amiright or amiright?
Posted by Dr. Mike Desing at 6:05 PM 1 comment:

Creativity is a Flowing

So I got a round of stuff done for Sentinels of Echo City, and I've got the next issue of Doc Stalwart's adventures well underway... and I've turned my attention to Tales of the Splintered Realm.

The three big knocks against the system were that the spell system was pretty far removed from the classic D+D system, that the core rules don't include the 'big four' classes, and that there is no representation of faith magic in the core rules. All of these were intentional, but they are all things I've decided to correct. In creating expansion materials (I'm working on a dungeon crawl), I've realized how many basic things you need in place for dungeon crawls... things like curses, wizard lock, dispel magic, and turning undead need to be in the core rules, because including rules for these in supplements for dungeon crawls creates an unnecessary layer of material ("you can find the rules for this in module A1, the rules for that in module B3, and the rules for this is module C1")...

The core rules can be a central clearinghouse for all of the basics without adding any bloat. I am adding one page of character archetypes, 2 pages of spells, and a page of treasure. That will keep a solid foundational game in place, but only increase the page count to 20, which is still nice and light.
Posted by Dr. Mike Desing at 11:50 AM 1 comment:

Totally NOT Captain Marvel, so I don't know why you'd say that

Just saw Captain Marvel with the girls. We all really liked it. Mary and I agreed that the only flaw was the banter between characters - it was clever, but rarely genuine, and sometimes a bit forced. The story was great, and the connections to the existing MCU were well done. On the whole, a strong offering.

And of course, it gets me thinking about how this sort of higher-end super-heroing works in game terms for Sentinels of Echo City. So, let’s give it a spin…

For some reason, I cannot get a direct link to my MeWe account to work. I have the link, and it works when I put it the browser field. I go right to my MeWe. But, when I create a link in the sidebar to the left, it comes up as an error. Help me Internet!
Posted by Dr. Mike Desing at 8:57 AM No comments: 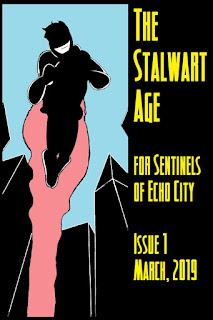 It took only a year, but the first official release for the Sentinels of Echo City RPG (Deluxe Edition) is now available.

The Stalwart Age has its roots in many places. Its heart is in 1980s comics and pop culture serials of the early 20th century. It’s got DNA from Flash Gordon and Buck Rodgers. It’s got a touch of Basic D+D, the Marvel Phile from Dragon Magazine, and a smattering of Star Wars. It’s a hybrid of my childhood. This first issue is larger than future issues will be: I needed some room to set up the central story.


Each issue will have an introductory piece (like this one), a short story set in the Stalwart Age featuring the iconic Doc Stalwart and his infamous rogue’s gallery, and some new material for the Sentinels of Echo City Deluxe Edition RPG, providing game stats and rules expansions that tie to the story for that month.
And yes, I plan for this to be a monthly release. I love writing about Doc and his world, and I am having a lot of fun fleshing out the history of the world that is outlined on the SoEC (Deluxe Edition) core rules.

Here is Doc Stalwart's vehicle, the multi-purpose Beetle. It might even be capable of space travel... I'd bet on it, personally. This, along with several other things from Doc Stalwart's world, will appear in the giant-sized first issue of The Stalwart Age, available next week! 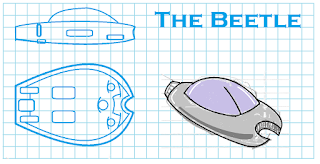 I've got notes going for several projects at once here, so thought I'd share one thing. This is a draft of the human man-at-arms. It's a human fighter type, but Tales of the Splintered Realm is going to avoid 'generic' classes, so this will be one of many variations of the classic fighter.