On The Fly Design Testing

Two weeks ago, my daughter Grace said she wanted to try playing one of my games...

After I picked my jaw up off the floor and stopped crying tears of joy, she rolled up a superhero and I took her through a short adventure. She actually liked it.

Then, last week, she said she wanted to try the fantasy game, and she made an elf scout, and I made a dwarf myrmidon. We went through part of the introductory adventure from the core rules and had fun. She wanted to play again tonight...

I decided to play test a system that I have had on the back burner for years, and which I think I read about somewhere else, but I have no idea where (I am not claiming originality on this; I am sure one of you can point me to where I got it from).

Here's the map of the adventure we created in this way. I planned NONE of this, but we ended up exploring an underground river behind a waterfall in elfin lands that used to be a dragon's lair. We found the bones of the dragon (long dead), were attacked by a pack of swimming rats, and encountered three water-spirit elves at the base of a 10' waterfall that attacked us but then gave us a figurine of wondrous power when they realized they were going to be destroyed. It was a great adventure that I never would have designed on my own, and as we went Grace started asking questions and deciding on things without my prompting, which was fun to see as well. 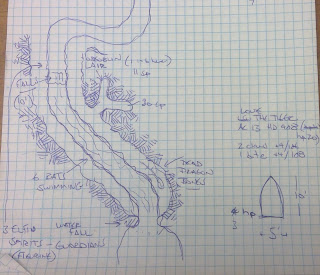