I am pretty sure I've posted... several times... about how I do my best thinking while mowing the lawn. Anyhow, today was lawn day, which means it was also brainstorming day. After I came in, I drew this map which is going to be the introductory adventure for Tales of the Splintered Realm, the new game (an update to SSR with a few flourishes from Sentinels of Echo City, and a few new things as well) that is a system I totally love right now. It's an entire game in 16 pages, and it's pretty much everything that Saga can do, only simpler, cleaner, and even more direct. TSR takes a step away from its B/X roots and a bit more towards an original design, but which is still compatible with OSR stuff. It should be out in a few days... to whet your appetite, here is a map of the Three Tombs, a little bit of the Caves of Chaos, but also a campaign starter for a story I'll be weaving through later modules (at least, that's the plan...) 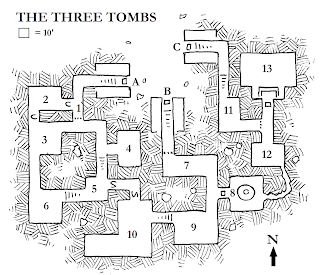 I mentioned in the last post that I was going to look at archetypes as being less generic and more specific. My current thinking is that each archetype is set up with a unique progression of skills, talents, and abilities... and inspired by Sentinels of Echo City, I am thinking that player characters routinely bust out of the cap of 12 on attributes. The great wizard has superhuman intellect, the mighty barbarian has superhuman strength, and the stealthy elf archer has superhuman levels of agility and coordination. That fits the more medium/high fantasy tone I prefer.

The core rules are leaning towards a heavy LOTR influence (as is only right)... with that in mind, here is the working draft of the wood elf scout... by level six (the cap level for the game), this dude (or dudette) could be walking around with DEX 18 (+6 modifier), firing his/her bow 4 times per round, sprinting 70' per round, and taking a total modifier of +16 to Feats to notice stuff. Sounds like someone from that particular book/movie series whose name rhymes with LEGO Bus...

I have started some notes for a revision of Saga of the Splintered Realm. My notes thus far take a lot of what I've done with Sentinels and strip the game down even further. Right now, my working approach is to go with a totally modular approach to the game. Instead of a core rulebook with general classes and rules, the whole system would be predicated around the idea of there being no 'generic' anything. The monsters and creatures in the core module would be somewhat archetypal, but by no means generic.

I am thinking right now that I go with a larger size (8.5x11 pages) and each module is only 16 pages long. This allows people to play the core game with only a handful of pages of rules, and then use any module that they want. Each module would require only that module and the core module, and each module would be themed in some way. While the second and third modules would be monsters and GM guides respectively, the additional modules might be on elves, dwarves, the underworld, giants, elemental flame... pretty much anything. Each module might include 4 new playable classes, a few dozen monsters, a few dozen spells, a handful of magic items, and an adventure locale.

I am looking for something I can get wins in around my hectic life schedule, and I have the itch to work on fantasy stuff again.

I will post here as I work on design stuff, and I'd welcome your feedback on things that you didn't like from the SSR core rules.
Posted by Dr. Mike Desing at 11:55 AM No comments: