I've been thinking about where to go with the cover for Shards of Tomorrow... and I was flipping through my old Star Frontiers RPG to glean some ideas... and I came across the MOST AWESOME drawing ever by Timothy Truman. He is such a fantastic artist, although I have never tried to mimic his style with washes and tones. However, this drawing is so incredible, and it's so perfectly retro-amazing. Here's his original drawing... 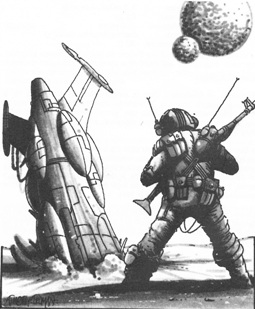 And here's my version of it... 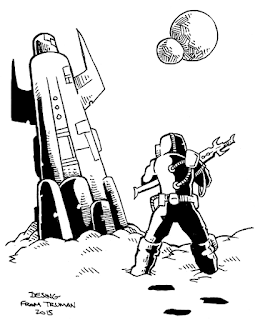 And here's the working cover design (I moved the moons down to make room for the title)... 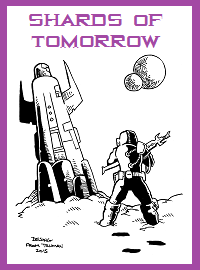 Anyhow, here he is (after having completed his first mission to recover fuel crystals from the derelict Orak gunship the Grimdawn. He's had a busy day, but Servo his bot assistant really saved his bacon a few times)...

Weapon Tinkering. Make a check using your INT +2. If successful, you add +1 to the attack, +1 to damage, or +10’ to range for one weapon. You may have a total number of modifications going at one time equal to your level, since you constantly need to modify/adjust the weapon(s) you’ve tinkered.

Spaceship Tinkering. Make a check using your INT +2. If successful, you are able to increase the rating of one spaceship attribute, once all costs have been covered. If failed, half of the investment is lost, but you may try again.
Posted by Dr. Mike Desing at 4:49 PM No comments:

And Now From the Far Edges of Space 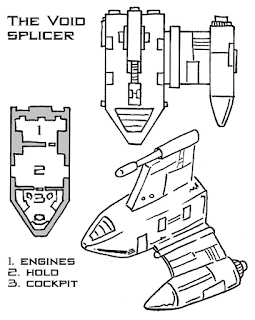 I'm back to tinkering with the sci-fi future version of Saga of the Splintered Realm, and I'm making up characters and playing as I design. It will slow down the process, but it should make it more fun to tinker with... and I'm coming up with cool background/concept stuff as a result.

Here's a design for the Void Splicer. It was a Terran Shuttlecraft 40 years ago (before the Great Purge), but has since been modified by the Glyn Engineer Gizmo, who lopped off its stabilizer wings, added a jump drive on an external wing hinge, and ret-conned a pulse cannon on top. Other modifications include an overhaul of its internal operations, routing all controls to allow for single-pilot operation of all systems, a reduction of the hold and expansion of the engine room to accommodate all of the extra energy demands of a jump drive and pulse cannon. It has since become the property of the mercenary Golrik Venn, who uses it to work jobs as a freelancer.