I like the way in which the B/X system that I’ve mimicked creates unique race/class combinations that become classes. These are nifty, and allow for all manner of unique variations. I have two modifications to this in mind, and I’d like to explore them both a bit here…

The first is the minor class. I like the idea of minor classes (limited to six levels of advancement) that represent the secondary species of the game world. These don’t all necessarily start at ‘level 1’, but start with the basic hit die of the monster (or maybe one before) and then carry on for 6 levels. For example, a pixie leafkeeper advances from levels 1-6 (at d4 hit die), and has access to some nature magic and some arcane magic (a limited spell list to choose from). Conversely, a minotaur vigilant advances from level 5 (5d8 HD) to level 10 (10d8 HD). They get advanced combat abilities, and pick up a few talents. The minor classes would be unlikely to be used by player characters, but there’d be nothing to say they couldn’t be… it would be perfectly viable to run a campaign of pixie creatures each built on a different pixie minor class, and to develop these classes quickly. You could have a pixie healer (lighter armor, faith magic), a pixie ardent (no magic, better fighting ability) and a pixie tinker (kind of a thief with a smattering of magic) pretty quickly set up as minor classes with minimal sweat equity. In general, it would make sense that the numbers you might encounter cut in half with every level. 50% are level 1; 25% are level 2; 12% are level 3; 6% are level 4; 3% are level 5; about 1% get to level 6. You’d rarely see these more powerful examples. This is a very simple plug-in that allows for a great deal of customization, but which you can ignore altogether if that better suits you.

Subclasses, however, don’t allow themselves to be solved quite as simply.

I don’t like the idea of a proliferation of ‘core’ classes. The barbarian, ranger, knight, paladin, cavalier, and mercenary all have one purpose – to drown out the fighter. I like the idea of each of these being a sub-class (dare I use the word ‘kit’?) that layers over the core class. +Dyson Logos did a brilliant series on subclasses for B/X games, and I like a lot of things about his approach, although I’d want to tinker some… these have to be a little bigger than just a +1 or +2 modifier to a particular ability, but grant access to other abilities beyond what is afforded through the Talents system that’s already in place.

By taking a sub-class, you sacrifice 10% of your earned XP. You get all of the features of your basic class, but also get the benefits and bonus features of the sub-class. Sub-classes would not necessarily be limited to linkage to one core class, but could be layered over several. Here are some examples (in early drafty form):

By the way, Minor Magic means that you advance as a caster, although you always use your LM in place of your level. This means that your casting ability would cap out at level 11, granting you the effective casting of a level 6 primary caster. You’d get access to sphere 3 spells (starting at level 9, when your LM is 5), but no better.
Posted by Dr. Mike Desing at 2:08 PM No comments:

You may have noticed that I've given the blog a bit of an overhaul. I shifted the focus almost entirely to my gaming work (zeroing in primarily on my flagship game, Saga of the Splintered Realm), and have removed most references to Army Ants stuff.

Does that mean I'm done with the Army Ants?

I'm working on giving the ants a proper (honest and truly) dedicated web space, and their own blog space. I want to take that webcomic to the next level (and my gaming work too), so I think it's best to separate the two. I want everyone to know that I do BOTH, but that doesn't mean that my potential audiences cross over. I think that there's a good chance I get some Army Ant readers who couldn't give a dang about RPGs, and the reverse is also true. Since this space is named 'the Splintered Realm', and most of the connections I've made through the blog are to gaming and not to webcomics, it makes the most sense to consolidate gaming stuff here, and move the ants stuff elsewhere.

Patreon backers for the Ants projects will be getting an update in a little bit (as soon as I get out from under more of the Splintered Realm work I have to do), and I'll get getting going on all cylinders soon enough.

Mike
Posted by Dr. Mike Desing at 2:07 PM No comments:

On Organization and Returning to Work (again) 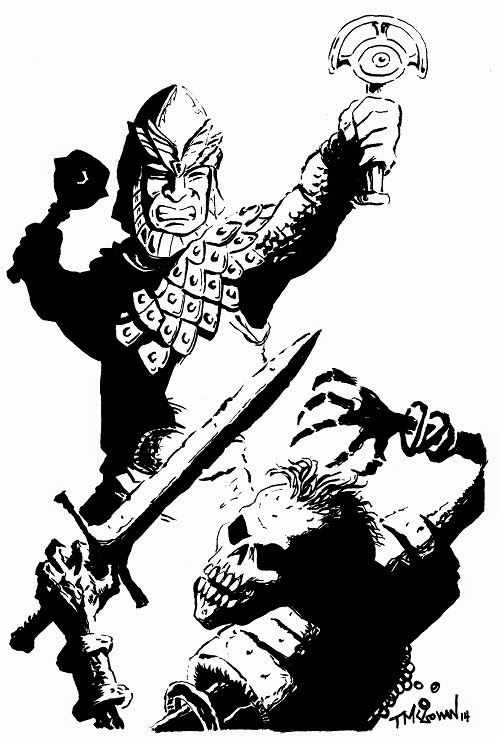 (By the way, this is a picture of me vs. cancer. Back to the nether world, you blight upon humanity!)

My goodness! My apologies that you haven’t heard from me in a bit, but radiation kicked my butt far more than I would have expected. Beyond the physical toll, it wiped me out emotionally and (more surprisingly) mentally. I just had nothing in the tank for the last month and a half.

However, radiation has been done for a week, and I got a positive update from my neurosurgeon yesterday, and I’m still off of work for a while, so I have time…

To FINALLY get this project DONE!

I learned a while ago that my subconscious works on projects even while my conscious brain is turned off or on some other endeavor, and I think that this process magnified that considerably. I woke up a few days ago with the vision for the game more clearly formed in my head. I have a bunch of notes and ideas that all didn’t really go together in a clean way.

I realized first of all that I had a problem with organization. I didn’t like the way the books were coming together insofar as how they would be used by the player/referee. For example, I had my core monsters from the main book, but the Vault of the Goblin would have a series of monsters that ‘just’ appeared in the Vaults, and the campaign book would have monsters that ‘just’ appeared in the Splintered Realm. While this makes sense to me, it doesn’t make sense to the ones actually using the game (that would be you) on the back end. While I know the Decapus is in the Vault of the Goblin book (because it was used in that adventure, duh!), you won’t remember that (nor should you) – and, when you want to drop a decapus on your unsuspecting party six months from now, you are going to have to skim through three books to find it.

That was no good.

So, all monsters need to be in one place. However, I didn’t like the idea of a separate ‘monster manual’, because that would be a fourth book… so now I have divide the project into four books each of about 90 pages? Not loving that…

However, if I pull all the monsters into the core rules, I would add about 20-30 pages to that book… and if I pulled in the extra magic items and artifact rules (that were going to be spread over the next two books), I add another 10 pages or so… and if I layer in the expanded character rules (sub-classes, nature magic, maybe psionics which I’m still on the fence about), that’s another 10-20 pages. So now the core rulebook is pushing towards 180 pages… meaning that it’s half of the project.

Now, the other two books are too slim (each less than 100 pages)… but if I put those TOGETHER, they are like the Reese’s Peanut Butter Cup of campaign guides. Plus, I can organize it LOGICALLY by how the game developed originally, and by how the B/X edition staged your growth through the system… you start in the dungeon, you expand to a local region, and you eventually spring out and get to know the larger world! I now see the second book in three distinct pieces, and I see a natural outgrowth. It includes a whole bunch of adventure information, but it also becomes ‘lite’ versions of the Dungeoneer’s/Wilderness survival guides (along with a manual of the planes thrown in at the end).

I have also been thinking about how you actually use (or might want to use) the adventuring materials. I think that the best way to go is to make the use of the adventure customizable to your preferences without having to extract what you want. For instance, I am used to writing a text block for a room that includes not only who or what is in the room, but why it’s there, what it’s motivation is, and what secrets or hooks could lead to or from this encounter. I like that. It is how I want to play. However, not everyone will. So now, each node of the Vaults (for instance) can have several layers of interaction, depending on how you want to use it…

Basic: The area has been taken over by wererats. Kill ‘em and take their stuff.

Moderate (listed in a separate place, after the basics are covered): Why the wererats are there. What they’re up to. How they interact with other forces. These wererats are being used by a Vampire two levels down, and will give up information about him if they have a chance to survive.

Advanced (listed last): Little nuggets of things that could be used as hooks for further adventure, or little payoffs for things that the players could experience. These have been exposed to a rare form of lycanthropy that cannot be cured. The leader is actually a son of the Eldest Wererat, and how they interact with him will influence how they may interact with the Eldest at some point down the road. Only the Eldest can lift this particular strain of lycanthropy, although he is unlikely to be willing to do so.

You could play through the level on the ‘basic setting’, and simply ignore the page that has the moderate and advanced information. You don’t have to read it, you don’t have to move through it to get to the heart of the encounters, and you don’t ‘miss’ anything if you don’t use it.

I want the entire second volume to be easily customizable to your experience. If you play once every few weeks for a few hours and want to hand wave a lot of transitions (‘okay, you’ve spent two days exploring the Vaults and have come to a place where you have found a large amount of huge rat droppings…’) you can do that… and if you want to have the players purposely seek this area out after a series of clues that led them here in search of the progeny of the Eldest Wererat, you can do that too. The game supports either extreme (or something midway between).