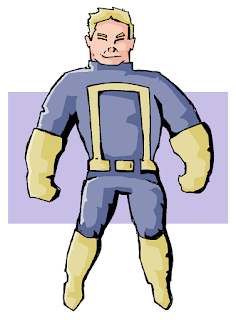 I posted a quick sketch before, but I decided to spend a little more time and actually do a full character design for Doc Stalwart - how he'd actually look in a comic if I was to do this for real. I think the proportions work pretty well, and it is my style meets the Incredibles meets Bruce Timm. 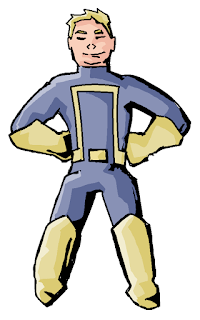 I suppose it's that everything about Doc is basically everything I liked about comics in the mid 80s. He's the entire run of Byrne's Fantastic Four, the Hobgoblin storyline in Amazing Spiderman, Secret Wars, and a little bit of David's run on Hulk in one. He's got Nomad's color scheme from the late-200s issues of Captain America; he's what Nomad wanted to grow up to become, if he had Reed Richards' intellect, and Wonder Man's physique, and Cap's belief system.

He's what my freshman self would have wanted to create. He's the thing that was always there under the surface, trying to fight his way into my stories.