Loyal Sidekick and Co-Pilot... or something something

So this file is called "Chewie" on my computer, which is totally a coincidence. The two species options are either "I Don't Know" or "Not A Wookie". However, I'll warn you now: this game has no 'official' species that you choose from. You roll up a species. The idea is that when you create your character, you also create the species he or she or it belongs to. You randomly roll up the things that make your species different from others. The game is the love child of Star Wars and Guardians of the Galaxy, so I keep asking questions like "could I make Rocket Raccoon with this" as much as I ask "could I make Chewie"? The answer to both has been yes so far, so that's good.
I have a 30-page draft of the game going right now, so that's a good bit of headway. I have no idea how big this book might be. Stalwart Age is 32 pages, Tales of the Splintered Realm is 48... this could hit one of those page counts, or I might just try to break the bank and go for 64. I know, crazy. I want enough setting and some starter adventures that the game world feels complete enough to start with. I have a dream of one day creating a massive 100+ page monster, but I don't know if this game is that... I mean it could be, but I'm not sure if it is. I plan to let the game tell me when it's done.
On the health front, I had a scan today that revealed the cancer appears confined a few lymph nodes on my neck, so the plan is surgery in a few weeks and radiation after that. It's a process I've been through before, and this is less intense than I already faced (my doctor said getting something off of my neck is easier than getting something out of my brain, and that seems legit). Thanks for the kind words and well wishes.
Posted by Dr. Mike Desing at 5:53 PM 1 comment:

First, the bad news. It has been several months of really bad news, followed by more really bad news, but I guess the worst of it is that my cancer has returned; I am going for more testing this week, with surgery and radiation likely to follow, and more intensive interventions still on the table pending lab work. So, yay me.
Okay, the glass half full view is that I'm going to have some free time... and I need something to busy my mind so I don't spend all of my spare time staring into the void. So, I'll put that void into a game and let the heroes 'pew pew' at it for me. I'm big into the Star Wars Disney + show thing, and I got a 'Boba Fett's Starship" (Slave I to the rest of us) LEGO set for Christmas, so I'm all into this vibe right now. Enter a revised version of Shards of Tomorrow. I had some notes going, and pounded out more yesterday, and this morning put together my first character design for the game. Here's Venn Golrik, my Han Solo/ Peter Quill avatar. I gave you a process look in the four stages. I should have kept a sketcbook one, but deleted it before I thought about posting this way... here you go. 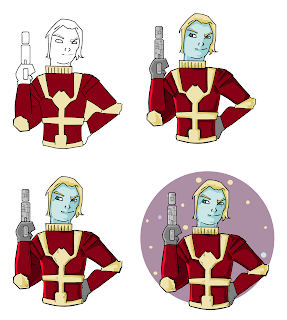 It has been a ROUGH couple of months. Ugh.

Maybe I'll talk about it at some point, but for now, let's just talk gaming, eh? I decided to try some solo gaming at a slow crawl just for something to occupy my mind, and made a level 1 bard. I figure he can build a team to go adventuring. I decided his first set of magic will be in arcane, but looking at the spell lists, I realized that the level 1 spells don't really have a lot of useful spells. My inclination has always been to make level 1 spells that are just introductory versions of more powerful spells ("this is just a really tiny version of fireball"), but for this character, I'm been leaning in to the idea of making level 1 spells (and maybe even some level 2 spells) more about utility. You can be useful as a caster rather than straight-out nuking foes. I drafted up three spells that I'll be trying out, considering my character is going to be a 'hit and run' kind of dude.

Evanesce (Arcane I; self) Use 1 action to produce a puff of smoke at your feet; you may immediately attempt a free sneak (or sneak at +4 with existing sneak) to travel up to your move in any direction (that you can normally reach). You cannot evanesce to the ceiling or through the floor, but you could evanesce behind a nearby rock or around a corner.

Glamour Weapon (Arcane I; 30’) Use 1 action to provide an illusory effect upon one weapon that makes it appear exceedingly magical and powerful for 1 turn. Those struck by the weapon must attempt an immediate morale check at -2 or flee. Those who make a successful morale check do not need to attempt this again.