Echo City Team Up #1 is now up, and it's a pay-what-you-want download. This means that if you DON'T pick it up, you are saying that my work is not worth your bandwidth and a little bit of storage space. And that's just insulting... 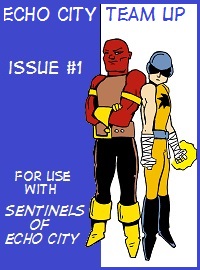 The Junkyard Dawg has been supplying weapons to the criminal underworld, and it's time that someone dries up that pipeline. Two Heroes You Can Hire seem up to the task.

Inspired by the meticulous planning to release Marvel Cinematic Universe films for the rest of my natural life, I decided to lay out a road map for Sentinels of Echo City's Phase One, taking us through the next twelve months...


Echo City Team Up will be 10-page adventures offered as pay-what-you-want plugins for the game. These include a few new characters, a scenario/setting, and a new trait or talent (or a few).

If I could complete 6 issues (about 50 pages of content) and 3 supplements (about 65 pages of content), I could then release print Annuals that would provide an update of that year’s new material, at about the same length as the core rulebook. That would be cool!

I figure that the game has some traction and some interest, and I'd like to see that grow! In addition, I'm hoping that some third party publishers decide to release content as well...
Posted by Dr. Mike Desing at 3:21 PM No comments:

Christmas In July and Bonus No Prize

The Christmas in July sale is on at RPGNow, and you can get all of my titles at a pretty good discount... if you've been waiting to pick up Sentinels of Echo City, now is a good time... especially since you still get the $5 credit for the core rules in print! That's what we call you win/win. If you order in the next two hours, you also get a special edition No Prize (vintage edition, exactly as offered in 1980s Marvel Comics) delivered right to your doorstep.

The great gang over on the Google+ community have been suggesting that some quick reference materials for character creation, especially a chart with the 100 traits, would be a handy resource for those making characters. In the interim, +Michael Hansen posted a sweet new character sheet that improves upon the one from the core rules quite a bit. It's all been collected into two jam-packed pages of niftiness that you can print out and use. If you've been wondering about Sentinels of Echo City, this allows you to roll up a few hundred characters, even if you won't have any idea how their abilities actually work or how to play the game. I find it's fun just to roll up lots of characters, so have at it!
Posted by Dr. Mike Desing at 9:58 PM No comments: