I had a little trouble getting this one right; it's a transitional issue, and I didn't want it to fall flat. I'm happy with how it turned out, even though it is far more character development and setting things up than it is straight-up adventure. I figure there's a lot of straight-up adventure I'm setting up... 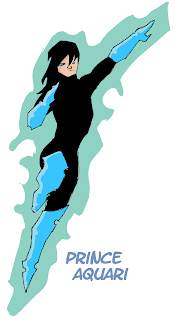 While I'm all about Shakespeare Deathmatch right now, and I'm still in transition back to school mode (first time teaching English 8 and brand new to middle school, so whew), I did find a little time to update the Stalwart Age Character Database, adding two undersea characters, Prince Aquari and his arch nemesis Lord Lamprey. There are a lot of titles being passed around in the deep, obviously.
Posted by Dr. Mike Desing at 8:42 AM 2 comments:

Shakespeare Deathmatch is Now For Sale

Shakespeare Deathmatch is now up for sale! 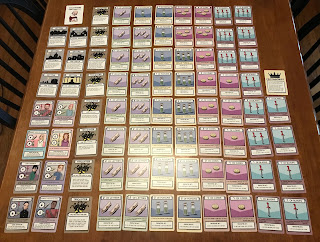 It took about two weeks, but the third draft of the deck of Shakespeare Deathmatch came in - and the cards are perfect! I'm so happy with the printing, and I finally banished all of the little layout gremlins that were messing with the cards. I'm going to go through to dot I's and cross T's on the DriveThru site, and the cards should be up for sale in a few hours. I can't wait for people to start playing this game.

By the way, I recommend the hard plastic box for an extra dollar - totally worth it. 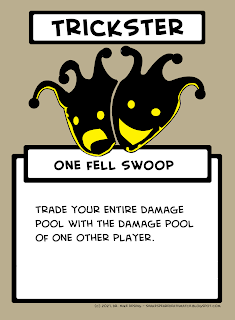 I knew that beyond the four basic attack cards, I wanted something that would change play; I wanted there to be unexpected events, twists, and turns that could snatch victory from the jaws of defeat. I didn't want this to be random, but I wanted there to be a bit of strategy and luck combined. I ended up with two things: trickster cards and when revealed effects.
Trickster cards are kind of like wild cards, but they allow you to do something else on your attack, in addition to attacking. These allow you to do things like improve your hand, get a card you really need, or even to completely flip damage with another player. Sometimes, you know that a particularly good trickster card is out there, and the pressure is on to take a player out before they get a chance to use it. It puts a clock on the game, increasing intensity as you try to out-maneuver your foes.
"When Revealed" are strategic effects you choose to activate. You can play the entire game without ever revealing your character - but you get a perk when you do. It allows you to evade imminent doom, or to strategically move damage to another player (depending on the effect your character has). I have found that these also are a big matter of play style; my wife routinely waits as long as possible to reveal her character (and sometimes never does), while I look for opportunities to reveal, and jump on the first chance I get that makes sense. Neither option seems to be particularly more effective than another, but both are strategic, and both cause other players to adjust their strategies in response.
Posted by Dr. Mike Desing at 8:52 PM 4 comments: 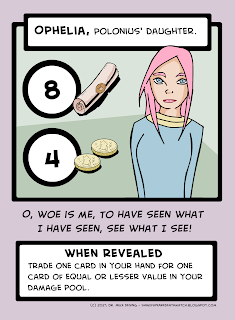 The game ended up in a sweet spot for me of 'medium' complexity. I've played a few card games that were quite complex (if you didn't know how every card you had worked together, and you didn't know how every card your foe had worked together, you were at a significant disadvantage). I've also played a lot of games that were quite simple (UNO). I wanted to end somewhere in the middle. I wanted it to be complex enough that it was interesting and it challenged you to apply some strategy, but not so complex that you had to enroll in community college to keep up. I will record a demo video at some point, but I thought in the short term I'd talk through a few rules... the basics are this:
1. You play a character from a Shakespearean play, trying to kill other characters from a Shakespearean play. Spoiler alert: a lot of characters die in Shakespeare's plays. Don't get too attached to anyone; they are likely to be taken out.
2. You try to avoid taking damage of the types your character is susceptible to. For example, Ophelia is susceptible to letters (representing emotional damage - reputation and mean notes - the original cyber bullying) and to coins (she has a family of some wealth and status). She wants to avoid having others place those cards in her damage pool. She is the polar opposite of sticks and stones - sticks and stones won't break her bones, but names are gonna hurt her.
3. You try to deal damage to other characters that will hurt them. While at first you are just trying to throw any damage you can, eventually you can force characters to reveal who they are, allowing you to target your damage to what will do the most harm to them.
4. Once you have a total number of points in your damage pool equal to the totals on your character card, your character is slain. When Ophelia suffers 8+ letters AND 4+ coins, she is done. Last character standing wins.
Posted by Dr. Mike Desing at 6:26 AM No comments: 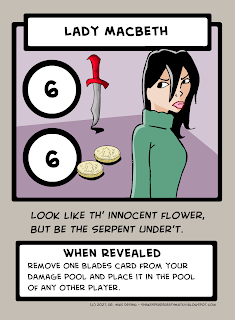 The genesis of the game design for Shakespeare Deathmatch comes out of a theory I have that unifies his plays; he often plays with the four elements, and ties these thematically to a set of motifs that recur across his plays. When you see what he's up to with the four elements, you can quickly get some insights into what's happening in scenes, between characters, or within characters. For example, I think I've been able to solve two questions of "Hamlet" (why does it take so long? Why the pirates??) by layering this theory over the play.
In brief, the four elements tie to four mental/emotional processes. On one axis (I put this on the horizontal) we have water and fire, and these represent emotions of love and hate. The prototypes of these are Ophelia (love - talks about water constantly) and Laertes (her brother - hate - talks about fire ad nauseum). The other axis (I place this one vertical) is intellect. At the top you have air, which is foolishness and deception. Rosencrantz and Guildenstern are up there with all of their talk of clouds and wind and playing recorders. At the bottom you have stone, which is logic and kingly behavior - and you have Horatio, the most stable character in all of literature. Like, the dude is a rock. He's also a timekeeper, and he grounds the entire play. When Hamlet is interacting with Ophelia, he's an emotional wreck and dealing with love; he talks foolishness and is in full-out trickster mode when interacting with Rosencrantz and Guildenstern. He has grounded conversations with Horatio (the key one is in a graveyard for criminy's sake).
Then I was thinking about how characters die in Shakespeare's plays, and realized that these also link to those ideas. There are blades for hate (or course), but poor Ophelia has all of those letters that break her little heart. Poison is a go-to for those deceiving others, while money is the way that kings get things done. Why kill someone when you can pay someone else to do it? These then became the ways that you deal damage to characters. My original draft had Hamlet as the quintessence (since that's his whole thing in the play - it takes so long because he has to integrate each of those four forces into his persona, and that's some heavy lifting), but he kind of breaks the game. I'm thinking that at some point there will be a special "Hamlet quintessence" card that shows him at full Hamlet or something, but for now I'm happy enough with how he turned out. I kept going back and forth between wanting to mirror the plays and the characters, and needing to balance a game for fluid play. I am happy with the sweet spot I found on it. For example, Lady Macbeth is rich and thinks she can social order her way to power, but she also is willing to pick up a dagger and stick a dude when necessary. This is the type of damage she's hurt by. However, she isn't very worried about little things like love (so letters roll off her back) and her blood is poison, so for her that's like drinking tea. That's the kind of thinking that went into each of the character cards.
Posted by Dr. Mike Desing at 10:15 PM 3 comments: