One of my goals

For a long time, I have admired Dyson Logos and his incredible skill. I have sometimes wondered why I even bother making maps, when he produces so many that are so strong, and many of these he releases under a creative commons license so that I could just pick 'em up and drop 'em into a module. His maps are consistently excellent, inspiring adventures that I wouldn't have thought of otherwise. However, sometimes he goes next level on me and I cannot even handle it. This is one example.

This map doesn't just inspire an adventure, but an entire series of modules. Suddenly, I have the idea for a campaign (loosely inspired by the Desert of Desolation Series) where the PCs are wandering the Astral Realm in a celestial skiff searching out pieces of an artifact while investigating all sorts of strange strongholds such as this that hold all manner of weird possibility.

This is just fantastic stuff. 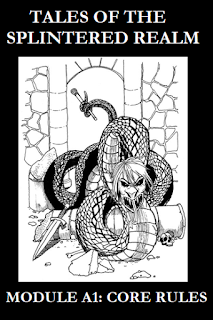 The core module for Tales of the Splintered Realm is now live. Go ahead and get your pay-what-you-want download for free, and when you realize that it is totally worth a thousand dollars, go ahead and plunk that down later on.

Let me know what you think of it, and I would be very appreciate of any reviews people would care to post. It's the best of Saga of the Splintered Realm, but even cleaner and more direct.

I am going to try for monthly module updates, and at only 8 pages a piece, that should be pretty doable. I have the first four or five planned out, but let me know what you'd like to see and I'll try to get it into the pipeline.

Except it doesn't have to be.

The thing is, this really only matters for sense checks. Everything else falls onto the static continuum. However, I can bump sense a little bit; instead of rolling a Feat, you instead impose your sense modifier as a penalty to the opponent's FEAT check. So, the guard with keen senses imposes a -2, the elfin master hunter imposes -4, and the elder dragon guarding its massive hoard imposes -6.

Easy to the peasy.

That just took out a LOT of language about how to determine FEAT ratings, how to resolve ties...

And, again, it better aligns with the source material. Red Box expected the thief to try to move silently or hide in shadows as a percentage chance of success; the foe you were hiding from was of secondary import.

Why I'm Excited About Tales of the Splintered Realm

I know that I get excited about each of my releases, and that I have a bit of a bias towards something that I've invested time and energy into. That said, I have a few reasons to be particularly excited about the rules for Tales of the Splintered Realm.

1. I have a plan for updates that I can actually, you know, UPDATE. The reality of online game publishing is that you need to be turning out new products and updates in order to keep the game alive. People are going to move on. It's the nature of the beast. the reality of my life is that I have neither the time nor energy for routine updates of 20+ pages. The entire model of the game is predicated on having the ability to constantly provide smaller niche updates that move the game in new directions. The 'core' of what you need is right here in 16 pages. It's all of the basic rules, and enough character archetypes, magic, monsters, and treasure to get you started and keep you playing for a while. It's the best of the red book of D+D. When paired with the existing SSR rules, which are still a pay-what-you-want download by the way and easily backwards compatible (I'll post about conversions soon), you have a WIDE range of options.

2. I have an actual plan to get YOU involved in growing the game. As I've been thinking about it more and more, one of the things that has allowed D+D to grow and thrive was that it was not just one vision for the game; D+D was the messy stew of a hundred different designers all pitching in. This was a big part of what has made D+D so wild and chaotic over the years. If you have ideas and a Paypal account (you will need both), I will publish your work (and do the layout; and provide a little art if you'd like); you can publish expansion modules through Splintered Realms Publishing as 'official releases'. I'll say more about this soon. I am thinking of this as the "Ed Greenwood" model; he started by fleshing out parts of his game world through shorter pieces in Dragon Magazine, and eventually created an important corner of the larger D+D universe. You could decide to publish your own collection of monsters, or spells, or items, or an adventure... and start building your own corner of the Splintered Realm. And, if it sells a million copies, I guess you've just made a lot of money. I figure that people will want my core rules to get your amazing supplements, and I get to keep all of the yummy publisher points so I can roll advertising forward, so it's a win/win.

Of course, you can also publish your own expansions on your own, and I'll soon share the template that I use so that you can just go in and plug in your own content and build you competing empire that sells millions of copies and when you get the designer of the year award at GenCon and you don't even mention my name and I'm crying in a corner somewhere I will bring up this blog post and tell everyone about it and no one will care because you are so cool.

The game is done, but I'm spending a few days on edits so that this little package is wrapped up with a bow. I don't want a single typo, and at only 16 pages (one of which is the OGL), I should be able to do this.
Posted by Dr. Mike Desing at 10:49 AM No comments:

As I refine and refine, I keep going back and forth on a few issues. In the end, I think I am going to go with the simplest option for each problem, because the simplest is the easiest to remember, it takes up the least space, and at the end of the day you don't lose anything from the play experience by taking the simpler option that the more complex option would have given you...

FEATs. FEATs have grown a bit since the original SSR rules. In the supers game, the DT of a FEAT is relative to the power and level of the foe; Magneto's magnetic control is more difficult to resist than the Magnet Kid's (I just made him up, so (c) that immediately and wait for the royalty checks to roll in) magnetic control would be. By the same token, the breath weapon of a huge elder dragon is more difficult to resist than the breath weapon of a young wyrmling. Except it doesn't need to be. In several situations the FEAT is only allowing you to minimize the damage; you still get hit, and you still take damage, and this as scaled based on the level of the foe. Okay. Then there's this problem: if your FEAT modifiers scale with the foes, you basically always have the same chance of success; you never 'feel' like you are getting better, because the difficulty of the situation is also getting harder. In that case, why have FEATs at all? Why not have everything be a 50/50 chance? If I got to take +7 at level 1 to pick DT 20 locks, and now at level 6 I take a mighty +12 against DT 25 locks... I am no better off. The game is more complex, sure, but for no notable gain, and possibly for a loss. It's much easier to say that the DT for all Feats is 20, and then create a few basic modifiers; a good lock is always at -2 to the FEAT. This is how it is in the original SSR rules, and it's staying. I toyed with the Sentinels model, but it doesn't make as much sense here. This target 20 actually aligns better with the source material; your saving throw vs. Dragon breath is always the saving throw. It gets better as you get better, and is rarely dependent on the specifics of the dragon who is doing the breathing.

Magical Bonuses. This is always one of the big bugaboos. How do you balance magical benefits? I don't like the complex array of stacking; this item gives a benefit, unless it is with this item, then you take the better of the two; but in some cases, you get to take a third bonus, but only if the first bonus is not from a ring.
Bleh.
I am thinking of a simple hard cap on magical bonuses. You are limited to a magical bonus to any ability, attribute, or quality of + your level. At level 2, your magical bonus to AC can be no better than +2 altogether. This could be from a ring that grants AC +1 and a shield that grants +1 AC, or from a spell that grants +2 AC. Doesn't matter. You cap at your level. This means that a level 6 character could conceivably run around with magical +6 to attack, damage, attributes, Feats... okay. These are endgame characters. I'm cool with that. So, a level 1 character can pick up a sword that gives +3 to attack and damage, but he cannot use the full power of the sword yet; he just isn't powerful enough to wield it, so he gets +1 to hit and damage. I actually like this a lot, because a character could start with an heirloom weapon or suit of armor and not know its full benefit until a few levels are achieved and it stops getting better...

Magic. I have WAY simplified the magic system. I like it. As a caster, you can cast one spell of each spell tier you have per turn. If you are a level 3 primary caster (like a magic user), you get a tier 1, 2, and 3 spell each turn. You want to throw fireball every turn? Fine. You only get one, so I hope it counts. This at least requires some level of diversity. In fact, this better aligns with the movies that I often try to emulate; a wizard never just stands there delivering the same spell over and over. The wizard draws different spells from his repertoire, throwing an assortment of different magic at his foes. Mechanically, the game will support this approach. And, this solves the problem of a level 2 magic user have a grand total of 2 spells per DAY. Ugh.

The draft is coming along nicely. I should have it out in the next few days.
Posted by Dr. Mike Desing at 3:56 PM No comments: