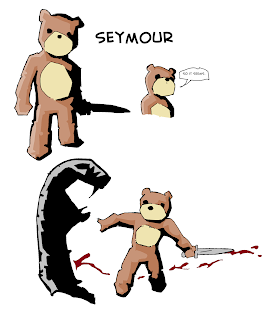 First of all, no apologies necessary if you don't keep up with my blog. I post like once a month, so I kind of bring it on myself. I am not going to say I have writer's block or a lack of ideas or any of those sorts of things - I have a lack of passion for a project. I will work on something for a bit, tinker and noodle and sketch, rough out a few pages of ideas in a Google Doc, and then run out of enthusiasm. I haven't found anything that grabs me. So I post nothing, because there's no significant progress to report on.

And to be honest, I have fiercely avoided autobiography on this blog for a long time. I wanted my creative self to be presented in a certain way, and for the rest of me to remain tucked beneath the ocean all nice and cold and icebergy. But maybe that is the thing that is actually putting a limit on my potential. I don't know.

I thought maybe I'd work through it with you.

I was talking with another member of my department this week (at the school where we have both been teaching high school English for 20 years), and we were talking about creativity and enthusiasm and where art comes from. I quoted something I had heard attributed to Lorne Michaels - comedy cannot come from anger. I have been sort of simmering in anger for some time now over a few issues in my professional life. I'll just summarize it this way - I have been on 35 interviews for school leadership positions, and I have 20 years' experience and a doctorate (along with two master's degrees), pristine qualifications, and sterling recommendations. I should have landed the first position I applied for. I almost never make it past the first interview.

But I also have a hole in my head from brain cancer. And it scares people. Not give them nightmares scares them, but it makes them... uneasy. They try not to look at it. They politely avert their gaze. And then they send me an aloof letter saying they are 'going in another direction' or 'found someone better suited to the position'.

Maybe don't have a hole in my head.

And I have anger. I see less capable people beat me out. Over, and over, and over again. I know that I'm not the first person to face this (I assume that this has been the story of pretty much everyone who is not a white male in the history of the Western world) - but it's frustrating nonetheless.

And the worst part is that it has made me assume I cannot make creative stuff well. I have too much anger and frustration right now to make art. I need to wait until I'm in a happy place, where I have peace in my soul and a song in my heart.

And then I started the Little Prince (also on the recommendation of the same colleague). I'm doing the airplane in the air approach and reading it for the first time with my honors classes - I'm not reading ahead, so I genuinely am not sure what's going to happen, and I'm sharing in the class discussion as we try to build meaning in the text together. It's fun and challenging to have no secret insight that the students don't have. Teachers always stack the deck in their favor. I generally know the answer to the question before I ask it. Not this time.

And I read a smidge about the author. He was a combat pilot. He died in combat. His marriage was a mess. This was not a happy guy writing art from a position of rainbows and unicorns. He was frustrated and scared and trying to work through it.

The last time I was this unsure of myself in general was when I created Seymour. I was in high school, and had no idea who I was or what I wanted to become. And he kind of helped me. He got me through some stuff.

I doodled him today. I think he might be offering to help me again. I might take him up on it.