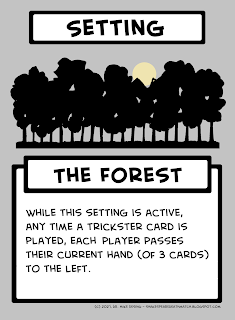 Grace and I just played two games, and here are some discoveries:

A few simple rule changes (on reveals, you discard any cards in your damage pool that do not count as damage to your character) is a BIG motivation to reveal. It frees up cards and increases tension. It's a nice touch.

The whole idea of damage pools becomes a key part of the strategy. You are dropping points in the damage pools of others just to get them out of play so they cannot be used against you. Sure, my 3 Letters card will not harm Macbeth (it must be of woman born, I guess), but if it's in his damage pool, he cannot use it to inflict further injury upon poor Ophelia. She's been through enough already.

The trickster cards can make big shifts suddenly. Grace ended the second game by having Macbeth (appropriately enough) play a card that killed both of our characters; she was about to be defeated, so she figured she may as well take me with her :)

There's an attrition of resources; as better cards get locked up in the damage pools of others, the one and two point cards becoming increasingly valuable as the game grinds on. I like that a card that is perceived of as a throwaway card early on can become quite valuable down the home stretch. When you have a bunch of one-point cards in your hand, but so does someone else, and you only need to drop a point on someone to win, that becomes a very valuable little card.