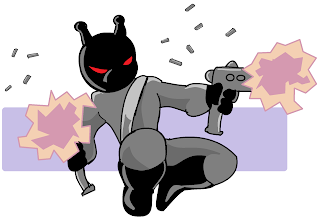 While the Fall of Valhalla was a story that I started, and that I would have considered a satisfying end to the overall comic if it ended there, I could also see the following stories having taken place. Theoretically, this would have been in 2003 and 2004 maybe.

Raiders of the Lost Egg

The Ant Queen learns that of a cache of royal eggs that were stolen last season, one remains. Intelligence reports that the egg has been preserved, passed around the black markets of the towns in the Sandbox. This is the hope for the future; if this egg can be recovered and the child born, she would be the next ant queen. A small team is sent on a secret mission to recover it. I presume this would have included the core team of Gunner, Zak, Phil, Vince, and Slab.

After a series of small skirmishes with locals, they learn that the egg was taken to a hidden temple deep in the sandbox where a cult holds it in great value. There, they explore the temple, getting through a series of traps and obstacles to finally be captured by the cultists, a random group of insects.

It turns out the leader of these is the ant who hatched from the egg eighteen weeks ago - the princess has already been born (plot twist), and believes that she was sent by Fate to lead these insects out of destitution. When she meets the rest of the ants, her true lineage becomes clear, and together they bring this rag-tag group of insects into the fold of the new ant kingdom.

It turns out that the prophecy Sarge had seen previously (in work I published on the online Army Ants webpage when I started the Fall of Valhalla storyline in like 2014) was that Phil would be the next king of the ants, and would marry the Queen’s daughter - Fate had revealed that Sarge’s duty was to protect Phil. He had spent the rest of his professional career watching over Phil and trying to prepare him for this incredible honor and duty.

At the end, Sarge has married the Ant Queen and they consider retirement and the handing over of duties, while the young Crown Princess marries Phil, and they begin to plan for a new ant hill, and a new future for the red ants of the Backyard.

I like it that the nerdiest character becomes the eventual leader. That was something I decided really early in my work, probably as far back as issue five or so.

In a side story, I started a narrative called ‘the Storm’ which was a bit of a Frankenstein story. This would have maybe run for two issues, comprising issues 41-42. There’s a mad scientist living in a stump. Phil, Vince and Slab get stuck there during a patrol where a horrible storm comes in. The mad scientist brings a dead insect back to life, and it goes on a rampage within the stump, ultimately killing the mad scientist and nearly killing them all, but it ends up making friends with Slab, because they both have the intellect of a peanut, and the same sense of humor. It was a one-off, silly story that I started as well but never finished. They leave the Franken-bug there to lord over the stump and live out its existence in relative peace. Maybe I would have plugged this one in before the Raiders of the Lost Egg story. Not sure. It makes more sense there; once Phil is with the princess, he probably retires from active military life altogether. I see this one as a ‘flashback’ story either way, set between issues 6 and 7.

I did one page for this decades ago, and then went back and created the first ten pages or so on the webcomic page a few years back, but never got much further. It's a story that exists in some form...

I had a few sketches done for a one-off ladybug solo mission with Honeydew where she raids a bee hive. I suppose this would have ended up as issue 43 in the hierarchy.