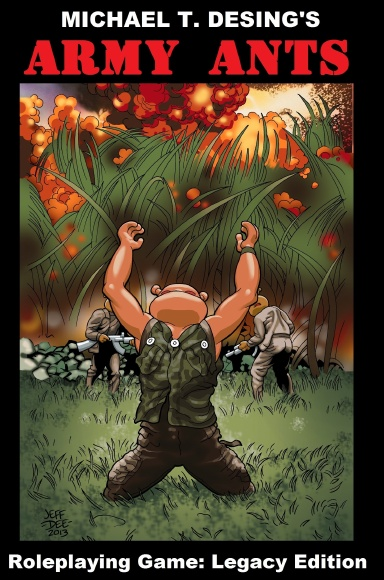 Well, look who decided to finally blog again... yeah, I know. Between getting back into the swing of teaching, a series of interviews for jobs I didn't get (grrr) and lingering health issues that keep knocking me down (double grrr), gaming stuff has been pretty far from my mind. However, the school year wraps up this week, and I got the first genuinely GOOD health news today, so my spirits are lifted. I started to let my mind wander around to gaming stuff, and started thinking about my little team of Army Ants. So, I cracked out the hardcover copy of Army Ants: Legacy and decided to thumb through it. It has been 9 years (!) since it came out, so I am far enough removed from it now to be objective.

My first impression is that this thing is pretty nice. The layout is very clean. It feels full at 160 pages. It's got lots of art, and the art is consistent throughout. It's got that FANTASTIC Jeff Dee cover.

Reading the first 16 pages, I like it so far. The dice mechanic is pretty nifty, and it reads as if it's got enough nuance to it to keep things interesting. It's got that nice balance of simple but elegant that I am drawn to as both a designer and player. It's got a great vibe, and most of the writing holds up well. I found a few turns of phrase that I have since worked out of my writing, and I found one typo, but so far it's holding up quite well. I also went back and re-read reviews for it, and people were generally very positive about it. Final thing: It's all me. This is the only game where I'm not trying to ape someone else's universe, but I've created my own. That alone is, to me, a big plus. Maybe I'll keep reading and do some playing. After seeing Top Gun: Maverick on Saturday night (which I really loved even though I was generally meh about the original), I want to make a helicopter gunship pilot and send him on a few missions. Maybe I'll get to that, too...