Onward to the Future

I don't know why this feels like a big deal (it's probably no bigger of a deal than any other project I've done - I assume they all feel like a big deal when I launch them), but I've got Teaching Ted (version 2.0) ready to roll. It came together pretty quickly (always a good sign), and I've got the initial sites set up.

I am going to be posting on both Webtoons and Tapas, at least initially. If and when I get some momentum going, I'll probably get a Patreon going as well, but I'm going to take this a step at a time. I've got four strips done, with scripts and some of the drawings done for another six or eight, so I'm pretty well set for the first few weeks. The comic will be updated on Tuesdays and Fridays, starting September 2.

I wanted post 1,000 to be about going forward, and I suppose that this applies.

While I lean towards Tapas, you can read it on whatever platform you prefer. I would appreciate any follows/subscriptions/likes/comments you feel like contributing. 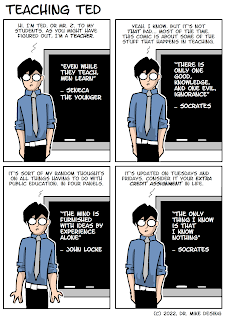