I find the writing process for a comic strip is fundamentally different than other types of writing I have done. You have a very limited framework to fit ideas within, so things like rhythm, timing, and pacing are vitally important. A few word changes or re-ordering a sequence can fundamentally shift the entire strip.
Additionally, there are two competing forces at play when writing a comic strip; you ultimately want some payoff for the reader. There has to be at least a chuckle or a moment of 'aha' that a reader receives for their investment. It's a low-intensity interaction with a reader, but you want the reader to experience at least one thing during their time in that individual four-panel strip. On one hand, you want to pack as much stuff in as possible. On the other hand, this is a marathon and not a sprint; a long-range reading of some of the great comic strips of all time will reveal that they would have a 'theme' for a week (or longer), mining that idea for as many different individual strips as possible. However, the thinner you spread your material, the less likely you are to give a reader a payoff in each one.
With Teaching Ted, I want there to be three payoffs per strip. I want there to be something in the first panel that makes you smile or snicker or roll your eyes or something; the message on the chalk board, the cat meme on his desk, the sign under the superintdent's name plate - there should be some immediate encouragement for the reader to keep going. Panel two is the transitional building panel; it's the rising action. Panel three is the climax - that's the big payoff for that strip (I think) or a really powerful tease/hook for the final panel (which should be its own form of payoff), and then the final panel has the final downbeat and the closing statement. It's hopefully the best panel, and pays off the investment in the other three.
However, I'm finding that in drafting, I'm often combining two or three ideas into one strip for maximum payoffs. This is the strip I'm working on this morning...
This is one of my TV strips. The idea is that Ted is watching TV; this is my way to reflect on larger political and social events that have some impact on teachers and classrooms; Ted is a witness (often disengaged) to the larger forces happening that will ultimately force their way into his classroom (via his TV at home). In this case, I was thinking about the "don't say gay" policy in Florida, and how to blow this up. By the way, I've decided Ted works in a hybrid conservative state that takes the worst educational policies of the south and merges them into one super-state of awfulness. Anyway, the script started this way:
1. A NASA mission today went wrong when the controller was unable to stop the mission in time.
2. In his own words, "I didn't know if I could say abort. You know. Because of the other word".
3. That other word, as we all know, rhymes with PLAY. And, we will not say it either.
4. In other news, the governor has proposed a bill that would prohibit the public use of the word "abort".
It was okay. It's got a few little payoffs, and an ironic kind of twist at the end. It works well enough, but it's not great, and only borderline good.
I had another draft going with kids and toy AR-15s and them being a song and dance group that goes around doing patriotic songs. I didn't feel like I could get a whole four-panel strip out of that gag, but I fit it into panel one. Then, I decided to up the ante on the word you cannot say joke, and stay there for the rest of the strip. I had to pack things more tightly, but ended up with a much stronger draft:

1. Those local kids are so patriotic.

And cute! Those miniature AR-15s were adorable!

3. I wanted to say abort, but I didn’t know if I could say that anymore. You know. Cuz of gay.

4. Turns out he was allowed to say abort, but will now face misdemeanor charges for the other word.

Then, I had to edit as I was doing the layout, because not everything fit on the page. I cleaned up and tightened dialogue due to limitations of physical space, and ended up with an even tighter draft. Here's the page with dialogue. I used different colors to differentiate the various people speaking. 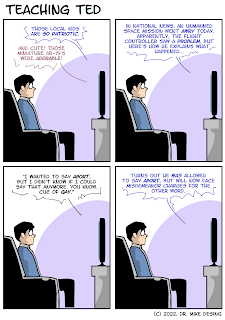 You'll notice that Ted has no arms here... that's because I've streamlined my process quite a bit. I don't draw a new chair or TV or even basic posture for Ted (unless needed) every time; for many pages, I have the basic elements in place, and then I'm just going to draw a hand and (in this case) a bowl of popcorn. He'll be eating popcorn as he watches; but I'm able to use 90% of the same drawing in every panel here, and add the 10% that changes. In some ways, my process is closer to animation than cartooning, because of how I'm managing pieces of the work flow. I've done one chalk board drawing; every time Ted is in front of the chalk board, it's going to be the exact same board design. Right now, I have ten different Ted postures drawn and two sides he can stand on the board; this gives me several thousand variations on how Ted can be standing at the board and talking to his class to work with. By building in these ways to speed up the process, I am more confident that I can maintain a schedule of two strips a week, and move to three a week if I get some momentum going.
Posted by Dr. Mike Desing at 10:07 AM