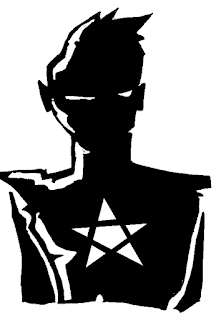 I have decided to at least try to develop a Sentinels of Echo City campaign book, but I still am not sure how to focus it. Let’s set out some goals for the project and then discuss how one might approach such a thing…

A campaign guide, to my mind, should do several things. First of all, it should provide a relatively comprehensive backdrop for gaming. This is different philosophically from developing an encyclopedia of the known world. It is not Wikipedia of Stalwart Earth. It is a roleplaying game supplement, and I want to approach it that way. It is supposed to provide a foundation for ongoing play, not lay out an existing universe in detail.

I also don't want it to be a catalog of characters. It is not the 'official handbook of the Sentinel Universe' or anything.

One issue is that I already did a ‘general’ overview in the core rules. It’s 20 pages long, and gives a pretty solid, albeit cursory, overview of the game world. I don’t want to just take that, write it again, and add ten layers. I feel like the primer that is there is pretty good – I could add a whole bunch of miscellaneous detail, but it wouldn’t significantly add to the game or the world. What you NEED to know is already in the core rules.

Focus on the idea of hooks. Every element should include hooks – not only what is it, but how you might use it in play.

Maybe I could think of it on the whole as expanding section 10: Adventures. Rather than writing linear adventures, I could provide 20+ settings within and connected to Sentinel Earth that may provide a foundation for adventure. These could range from the small to the large, from street level to cosmic. Wormwood Station, the Junkyard Dawg’s Compound, and Aegis Section Delta (from the core rules) all provided a map to explore, visit, invade, defend… a few of the characters that inhabit the location, and hooks for how you might set an adventure there. This would allow me to ‘dip my toes’ into dozens of locations, exploring each of them in significant depth while skimming past other places. These then become iconic, archetypal locations that suggest what similar locations might be like. This also allows me to build on the core rules while basically eliminating redundancy, which I like.

These ideas lend themselves to a modular approach. I could work on these one at a time, each at about 4-8 pages. I could release them as pay what you want downloads as I do them, trying to knock out one every few weeks. Once they are all done, I could go back and bundle them together in one master book. An average of 6 pages with 20 of them would be 120 pages, so targeting a 128-page supplement is not out of line. The core rules are 192 pages. To create another book that long, I'd need to create about 30 different locations... I do think that a version of the Solitaire Framework would be at the front of the book, and that the whole idea would be that you use the Solitaire Framework to build adventures as you explore locations. There is not a lot of 'he is sitting on his throne counting gold coins when the heroes arrive' type of text; it will be more along the lines of 'the villain is likely to be working in his lab, but is possibly in any other location in the complex.'

The visual design should be the same as Sentinels. I don't want to create a 'new' look for the game. I want to build on what I've already done, and have a second book that looks and feels like a companion to the original.
Posted by Dr. Mike Desing at 11:19 AM