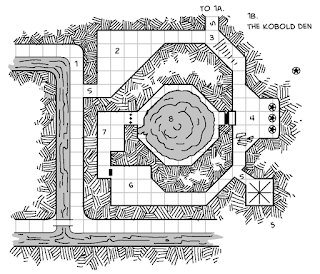 In play testing, my character found a map (it was a random treasure) in the lair of a giant bat. I decided this would be an area beyond the secret door in the starter dungeon for the core rules. This will ultimately be the first expansion for the game (because I'm already working on THAT). The idea is that I'm going to build a mega-dungeon over time. This is part of level 1, where it connects to the sewers under Stalwart Keep. I have learned to appreciate the value of secret doors - you can have a whole lot of things happening right next to each other if one side is not aware of the door.

In this case, a pack of kobolds set up shop in what was an abandoned start to a mine. They sneak into the sewers to hunt rats and spiders. It's fun. But then the gibbering mouther that lives in the muck pit (former start of a mine) in the middle drove their clan chief mad. And he started to sacrifice bigger and bigger things to it. And they tried to give it a rot creeper as a special treat. But the creeper wasn't as dead as they thought it was. And it ended up killing their chief. So now, they are holed up in the northwest corner, the creeper patrols the south hall, and a few guards have been forced to stand watch in the east, behind a barricade of garbage, to keep the creeper at bay. And there's a living statue that knows not to attack the kobolds. And that mouther just keeps screeching all the time, and everyone is a little on edge about it. And nobody knows that there has been a well-hidden secret door in the southwest that leads to dungeon level 2 there the whole time.