A New Map for the Vault of Mischief

I was originally using an older map as the entry into the Halls Beneath Bryn, a layer called the Vault of Mischief... but then I started to like the new style of maps I was doing... and then I thought that there were a few things I could clean up on that map... and then I just re-drew the whole map and consolidated. 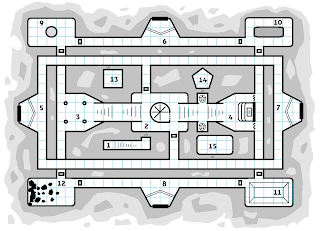 I've been updating the megadungeon to move rooms into the proper places with the new key. I'm breaking some basic rules of megadungeons by basically stocking every room. I cannot really help myself. Plus, from a player's perspective, I don't really want to spend time looking around empty rooms for the chance of finding something that isn't really there. I know that it gives the dungeon more verisimilitude to have empty rooms... but when you can only get the gang together for 3 hours once a week, spending an hour of that time scouring empty rooms for nothing seems like a big waste. It is a design choice born from the practical realities of gaming, not from an effort to create a fully immersive game world.

It's a trade off around practicality. You can always say that room with a pit full of spiders is just empty. Knock yourself out.