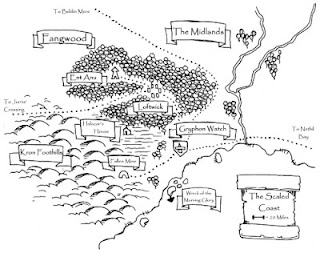 Expansion for Mythweaver: Legacy is primarily going to take place through sourcebooks/ supplements/ periodicals called the Mythweaver Chronicles. Each of these (at least for the first few) is going to focus on a particular area of the larger continent of Eastern Del Anon (as outlined in the core rules), expanding a particular area. For the first issue, I'm focusing on the Scaled Coast, specifically the area surrounding the starting location of Gryphon Watch Keep. This will primarily be built as a sandbox environment for ongoing play, with new monsters, some new magic, and a handful of new magical items - as well as at least 5 adventures (one full length). Most of these adventures have appeared in previous editions of Mythweaver, but they've been out of print for some time, and I am going through and updating them for the new ruleset. Here's a new map I drew for the region, and I'm working on the glossography and updating the adventures now... I expect this will be released in a few weeks.
Posted by Dr. Mike Desing at 9:26 PM