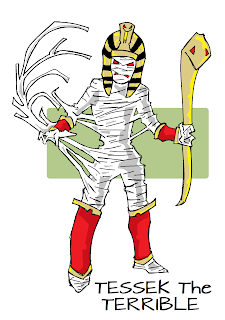 This week's update is all about a certain mummy. Tessek the Terrible has ended up being a more powerful foe than I first conceived him; he starts pretty powerful, but he gets increasingly powerful as he gathers his artifacts. He could work as a big bad for a campaign, since hunting down his relics and fighting him with different power levels is on the table. Each encounter with him can be a little different. The Stalwart Age databases have been updated; his character profile is in the characters tab, and the summary of his first appearance is in the comics tab. Head over and take a look.
Remember, you can see this sort of content a week (or more) before others do... sign up as a Patron (for as little as $1 a month) to keep new content flowing. Thanks to those who have already signed up!
Posted by Dr. Mike Desing at 9:47 AM