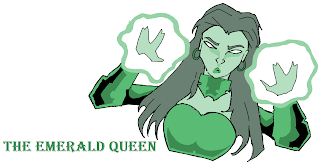 I am working on my game (you know, the supers one) at 2 in the morning. The girls (being my wife and daughter) are at gymnastics camp, and my sleep schedule is all off, and here I am plugging away at my game.

And I suddenly realized who Doc Stalwart is. He's my version of Odysseus. Yes, he's brave and strong and athletic - but his greatest asset is his cleverness. His keen intellect is his most formidable trait. I also see him traveling the world (and beyond), interacting with all sorts of strange and wonderful creatures. He fights monsters, and meets entities of cosmic power. He's flippin' Odysseus.

I realized it while drawing this image of the Emerald Queen. I was thinking that she's complicated - she's not a villain, but she's not exactly a hero. She rules a pocket realm. She has to rule with a strong hand, because it's a chaotic place with lots of danger. She has a thing for Doc. She's totally Calypso to Doc's Odysseus. And the floodgates of what I can do with this series opened up to me. I mean, I already had all of these pieces in my head of what he's up to, but knowing that there's a template I'm echoing helps me so much.