More Stat Blocks - Because Why Not? 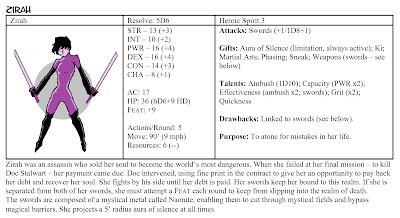 I think I have a plan.

I expect to be able to get this game DONE by July 1. I would love to launch then; I feel pretty confident that the core rules pdf will be available then. The print edition may take a little longer... we'll see.

I plan to make July my "Summer of Supers" event. I plan to post a different, new superhero profile every day on my blog for the month of July. This would be followed (I hope) by the Official Handbook of the Stalwart Age, which will be an encyclopedia of the game world, with entries for major characters, items, places, vehicles... you know the drill. The characters who appear throughout July would figure prominently in that book.

I have been putting together character profiles to see how these look with different characters. Doc's team will be in the Core rules as an appendix. One of the characters is Zirah, whose profile is above. I love how these characters are coming together; they are not straight up homages to other characters, but they're a piece of this character with an idea from there, sprinkled with something else entirely.