Hewn and Some Numbers 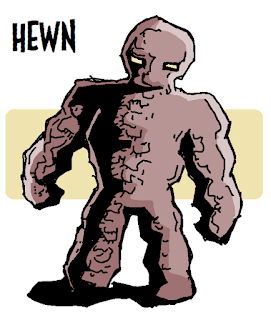 First of all a picture, because the kids like pictures. He is Hewn, carved from the Living Rock at the Base of the World. He's a sentient elemental inhabited by a little kid who has four elemental spirits he can embody. It's a whole mood.

Now that that's out of the way, let's talk about numbers. I put together a table that lays out all of the various values in the game: the attribute ratings (with modifiers), what the comparable Challenge Rating would be for a check at that level; what weight that equates to; speed and distance per action; and heat at that rating as an example of what intensities might look like.

The only problem/concern is how speed scales in terms of distance per action. The problem is that as characters get more powerful, they get more actions each round; so, a level 4 speedster with hyperspeed and PWR 20 (+5) is getting 9 actions each round. If he uses one of his actions to run, then this aligns well to traveling at 600 mph (moves 1 mile with each action). However, since he can theoretically use all 9 actions to run, he can actually run 5400 mph if he's using every action every round to run... so I've got to find some way to scale the action distances wayyyy back. I cannot assume that every character is going to take hyperspeed, but I have to account for it somehow. I think if we slow the progression of distance per action (maybe just go with a default of 100' per rating after 13) this would allow for an incremental bump, and allow you to really move, but also would keep things reasonable. This also accounts for the fact that you would be in combat most of the time, so you are doing more than just straight out running (or flying). You are dodging attacks, communicating with allies, and doing other combaty stuff that is not just straight up sprinting.