Down to the Rails 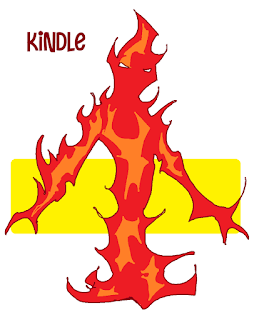 Here's Kindle, another elemental force that can be summoned by the little kid who can summon elementals. I am still working on his concept, but it's that he goes to activate his powers, and then one of the four elementals randomly shows up - there's a chance that he gets a partial Voltron (so two of the elemental forces merged into a meta-mental), and there's an even SMALLER chance he gets the Voltron mega-mental that merges all four. This is the flame elemental.

And speaking of burning things down... (my brother would call that a "Sean Mooney Segway")

In editing, I have realized that there are fragments and pieces and relics of older game editions that have persisted. There are sentences and phrases and entire paragraphs that were in the first superhero game I published in 2006, and which have survived to live again in each subsequent game. I've gone with the 'if it ain't broke don't fix it' approach. One good example is my section on adventure hooks; I wrote that for my first supers game, and while I've made edits and clean ups over time, the language and format is largely the same.

This edition is gutting it. I am not cutting and pasting a single phrase from any previous work. Even if I end up writing the same thing, I am literally sitting at the keyboard and re-typing it. I want to think about and make a conscious choice about every word that goes in. This means that some of the things in the most recent games I've published (for example, the half-page box I have distilled for character creation in Tales of the Splintered Realm) are not going to appear here - I'm making a decision about every design and layout choice, and I'm trying to rigorously avoid doing anything because I did it once before and liked how it turned out. This doesn't mean that I'm avoiding doing things that work; it just means that I'm going to make the best decision I can for THIS game right now, not borrow something from another game that works pretty well here too.